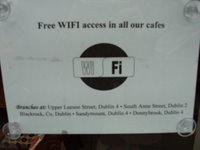 For a while I've been looking around for a coffee shop that I can go to at the weekend when I'm in town and get free WiFi with my coffee. Now I've found one, Cafe Java in Donnybrook had a sign up saying they are offering "Free WIFI access" in all their cafes.

I used to prefer Coffee Society for my caffeine fix, but they use BitBuzz who charge an arm and a leg for their WiFi. Cafe Java if more food oriented than casual coffee drinking, but if they really are offering free WiFi then I'll switch.

Update 27 April: I went to Cafe Java for coffee at lunch. Unfortunately I could see the network but for some reason my PDA would not connect to it. I wasn't asked for a key, and the PDA said the signal strength was good to normal and the network was open, but it just wouldn't connect. I asked the staff if I needed a voucher or something but they didn't know anything about the free WiFi. For the moment I'll assume it was my PDA acting up and I'll try again later.

>Cafe Java if more food oriented than casual >coffee drinking, but
>if they really are offering free WiFi then I'll >switch

Sounds like free WiFi is fairly high on your pecking order

Yup. It bugs me that a service that is readily available in the rest of the world with a cup of coffee costs around €10 extra here.

Cafe Java is great. It's one of the few places in Dublin (in Ireland, actually) that offers genuinely free WiFi to its customers. Just turn it on and there is is for as long as you want. No cutoffs after 30 minutes or crap like that. I go there a lot. They have great coffee and they let me stay for sometimes two hours. If it gets busy then I do the polite things and pack it up and go.

As a side note, there seem to be an unusually high percentage of Apple computers there...