Spain: 4 - Ireland: 0
What the hell? Sure it was always going to be a challenge but last night was brutal.
No comments: 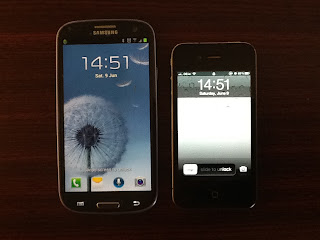 I had the opportunity to play with a Samsung Galaxy SIII at the weekend and I have to say I was very impressed.

Despite my fears that the phone would be too big it feels fine in the hand. In fact it is strikingly thin and light. Thinner than my iPhone 4. The screen is huge, especially when compared to the iPhone 4. The quality of the display is amazing, beautiful, bright and clear. Android runs smoothly and the widgets have plenty of space without taking over the page. It completely blows away my old work Sony Xperia X-10. Android on that phone was a nightmare of sluggish responses and poor applications but the Samsung Galaxy SIII shows how far the technology has progressed in a couple of years.

The case itself is a little too plastic.I am worried about dropping my glass backed iPhone but it always feel solid. I'd be a little afraid of sitting on a Galaxy SIII and snapping it in half. No doubt it is more sturdy than I think but that was the initial impression I was left with. 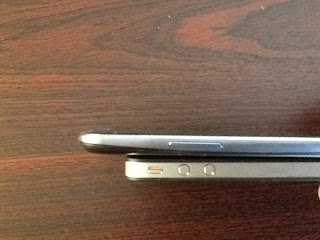 The built in camera app was impressive, with a burst mode that entertained for a few minutes but did produce lots of motion blur in low light indoor situations. The S-Voice application struggled to cope with my accent when I asked longer questions but was well able to cope with short statements. I haven't used Siri and to be honest I dislike the idea of calling instructions to my phone, especially in public, but while driving it would be useful. My iPhone 4 voice control is worse than useless and trying to get it to play certain tracks rarely works. I never use it to make calls since it always dials the wrong people. S-Voice coped better so maybe there is a future that doesn't involve me shouting obscenities at my phone while in the car.

This is the first Android phone I've used that made me think "wow, that's better than my iPhone". If I was starting out now I'd probably choose the Galaxy SIII over the iPhone. I'm sucked into the Apple eco-system now so it'll take a lot to make me switch. The iPhone 4S is a two year old design and despite it's beautiful glass and metal case which far exceeds the plastic Galaxy SIII's case it is now showing it's age when it comes to size. I think Apple need to address this in the iPhone 5 and while I doubt they will produce a phone with a screen as large as the Galaxy SIII they will certainly have to go beyond the current 3.5 inches.

It's not easy being Green

This morning an Irish Radio Station played a snippet of Kermit the Frog singing It's Not Easy Being Green and that pretty much summed up the mood of the people around me. After last nights performance in Poznan it's not easy being an Irish fan.

I don't mind so much that they lost, patriotism aside the reality of the situation was Ireland is the underdog of the group, but it was the manner of that loss that hurt the most. If you are going to play a defensive game that's OK so long as your defensive players step up and get between the opposition players and the goal. Instead there were moments when the ball seemed to be rolling around the Irish penalty box with Irish players staring at it afraid to take responsibility and kick it away. Our attack wasn't much better, passing the ball around afraid to take responsibility themselves and have a shot. Keith Andrews seemed to be the designated kicker on the night as in fairness to him he did have a few shots but they all flew away from goal like a beach ball being kicked into a hurricane.

We can point to the referee for a couple of bad decisions, a Croat goal that should have been offside or a free out and a penalty for Ireland that could have seen the score change from 3-1 to 2-2 but if that had happened the Croats would have been right to feel robbed and I doubt the score would have finished at 2-2 more likely 4-2 in their favour. They outclassed us and we were lucky they didn't score even more. That said their defense looked shaky at times and their goal keeper did not strike me as very solid, they will struggle against Italy and Spain with players who want to score.

The 20,000 fans who travelled for the game deserved better. The video of grown men in tears should be shown to the players this morning and they should be asked if this is the memory they want the country to take from these championships. They are better than they showed last night. No one expects them to qualify from the group anymore but they can at least show up in the Spain and Italy games. I'll still be wearing green and shouting for them, the whole country will.

How big is too big?

I was a little surprised when I saw the coverage of the new Samsung Galaxy S-III phone to read that they had increased the screen to 4.8 inches. Not being a Samsung user I hadn't followed the rumours but I was impressed the screen on it's predecessor, the S-II, owned by colleagues and friends, but I did think that the downside of such a nice screen was a case that was just a little too big.

Now the S-III has actually grown larger and granted while I haven't seen it in the flesh, the idea of a phone bigger than the S-II does not fill me with confidence.Look at Engadget for a comparison of the Galaxy phones.

I'll have to go into a shop when it's released to feel the phone in my hand but from the pictures it appears the new Galaxy S-III might fall into the "phablet" bracket, something between a phone and a tablet. Too big for a phone and too small for a tablet.

At the same time the iPhones 4S screen is looking a little old and small these days, but there has to be a happy medium between a small 3.5 inch screen and a cumbersome 4.8 inch screen? I'm sure some people will love the larger size of the Galaxy S-III but personally I hope the iPhone 5 sports a screen closer in size to the 4.3inch Galaxy S-II.but somehow managing to pack it into a smaller case.
No comments:

Some times I wonder

This morning as I left for work it was raining so I flicked on the wipers to clear the windshield and was greeted by the sight of two bare metal bars moving up and down. Turns out some gobshite had stolen my wipers and, when I checked the rest of the car, one hub cap. They had tried to take my neighbours wipers as well but seem to have failed. According to the local auto shop other cars in the area had been targeted as well last night.

They weren't taking wipers for their own car since they had targeted different makes of car and what use is one dirty hub cap, apart from making me have to go buy a pack of 4 new ones and end up with 3 spares? I guess basically they were just doing it for kicks knowing they were pissing the owners off, making us late for work and costing us money to replace the items taken.

Is there anything you do with a bag full of different brand wipers and hub caps that could be classed by sane, normal, people as fun? Is there a secret resale market for used windshield wipers? At €7 each in my local store for new ones I'm guessing worn, year old ones don't have a huge underground black market. Hopefully they have gotten their dirty wiper fetish out of their system now.
1 comment:

Household Charge Protest, a set on Flickr.
My photos from the Household Protest in Dublin yesterday
No comments:

St Patricks Day 2012, a set on Flickr.
My photos from the Dublin St Patricks Day Parade. 85 might seem like a lot but it took me hours to cut it down to this many from over 1100 :-)
No comments: